I thought since I’ve been a bit slack in writing actual blog posts, I’d share with you a feature, profile article I wrote for one of my writing classes last year. I interviewed Lindsay and Alex via email and came up with this article. My teacher prompted me to pitch it to a couple of magazines, but it didn’t seem to quite sit with their readership, so here it is for you all to have a read.

If you’ve never heard of Lindsay (welcome to my blog), if you have, here’s some interesting information I picked up from my interview with her and please, please check out Alex’s fantastic art. The link is below. 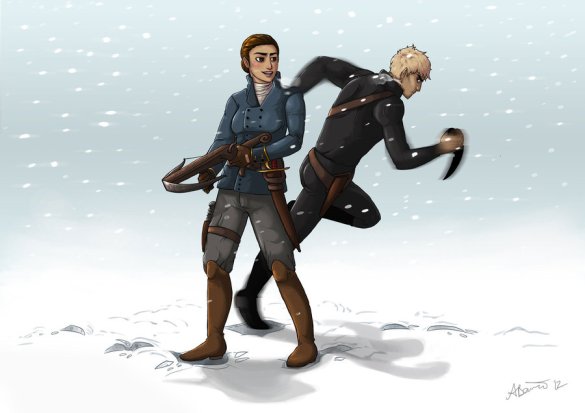 A quick slice of Sicarius’ black blade here, a well-timed punch there, Buroker is taking on the big six publishers in the fight for readers and exposure by attacking with a social media presence to rival even the biggest named authors.

Flush with new ideas and providing her readers with more new material than most of the juggernauts of the book writing industry, Lindsay Buroker is clawing her way towards the top of the Amazon best sellers lists.

Enigma, a short story from her Encrypted Series was released in early November, and book #5 in her Emperor’s Edge series, Blood and Betrayal only weeks before that.

Her loyal fans are seeing Buroker enter a warp speed frenzy of publicizing, promoting and interaction within her social media space that just continues to grow.

What goes into first obtaining a fan base and then keeping it? Buroker has staked her claim on potential fans in two ways. Firstly, by creating enjoyable books and secondly, by creating and cultivating a large social media presence.

Her career began with the first book in the Emperor’s Edge series being a mix of fantasy and science fiction genres; this resulted in the publishers being less than accommodating.

After receiving her first kindle and reading about J.A. Konrath’s success in self-publishing she decided to give it a try and quickly had her first two books available.

She now openly shares on her personal blog, Twitter account and Facebook pages a wide variety of aspects of her writing process. In so doing, she’s thrust open an often hidden side of being an author and provides her fans with something special. They can actively watch the next book they’ll read being created.

So, does this actually help sales? September of 2012 saw Buroker smash to pieces her previous independently published book sales record. Incredibly, she broke through the 50,000+ total eBook sales.

Averaging around 2,000 – 3,000 book sales a month since the end of 2011 has allowed her to give up her day job of professional blogging and commit to writing creatively full-time.

The last three years have been a whirl-wind of progress for Buroker; she’s published a total of 14 books, short stories and novellas. Each has been painstakingly written, edited and polished before being wrapped in a professionally designed cover and sent out in the world.

To date, her biggest hit with the fans is the Emperor’s Edge series. This Steampunk fantasy collection, currently consisting of five novels and three short stories, has created a real buzz.

The Emperor’s Edge series has escalated to the point of having its own forum created by the fans, for the fans. Buroker has solidified her online presence even more by frequenting the forum to interact with the fans.

One lucky fan has been privy to Buroker’s online communication in a way most fans could only dream of. Alex Baird, also known as SwearToad on the DeviantART artist community website, was approached by Buroker to do some commission artwork pieces about the very characters she’d been eagerly devouring as the books were released. When asked how Buroker found her and broached the topic of a commission she said:

“I think I was more nervous about dealing with her than she was dealing with me – I was worried about being professional and not coming across as a creepy stalker fan whereas she was pretty cool about the whole thing,” she shares.

Today, fans witness in Buroker a seemingly endless motivation and drive, an almost constant presence online and an approachability that is yet to be rivaled by other authors.

She also shows a willingness to embrace her fans’ creativity and vivid imaginations, as seen by her support of fan art and fan fiction based around her characters. However, things could very easily have gone in a different direction for Buroker.

“Despite the childhood interest [in writing], and some encouragement from teachers along the way, I was also told that making a living as a novelist wasn’t very likely, so I’d be better off studying subjects that would help me ‘get a real job’,” she relates.

Instead of pursuing the love of writing she’d possessed from an early age, Buroker studied business and computer science and didn’t find her way back into writing until she was in her twenties.

This foray into other areas of schooling could very well have been the root of her push to open up the previously unknown side of self-publishing and an independent author’s everyday struggles.

Any author, just starting out or not, will spend a great deal of time writing every day. Buroker’s current daily word count goal is sitting pretty at 2000 words.

Despite this lofty goal, she does take time out of her busy creative schedule to maintain her personal blog, answer fan emails, and interact with readers and fellow authors on Facebook, Twitter and Goodreads. She also spends a bit of time reading other authors’ blogs and related forums to see what is going on within the industry.

When your career is firmly placed in the online realm it is all too easy for this realm to take up the whole day. Buroker beats the inner online-geek by travelling and getting outside her Seattle home as often as possible. When asked what things she enjoys when she’s not writing she said:

“I go hiking [in the beautiful Arizona countryside] with my dog [Vicki – a Vizsla], play tennis, and take yoga classes now and then. As a writer – and email/Twitter/Facebook/forum addict – it’s easy to spend the entire day inside at the computer, so I seek out activities that get me away from that.”

Want to find out more about how Buroker creates her fantastic books, forges a strong online presence and still maintains a happy active lifestyle? You, too, can tune in as Buroker continues to share her journey. Her blog and professional website is www.lindsayburoker.com.

Have you ever tried your hand at writing articles or columns for papers or magazines? How did you go?

2 thoughts on “Lindsay Buroker’s secret weapon against the big six!”