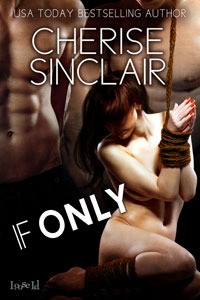 Synopsis: After the last fiasco, Sally gives up. She’ll never find a Dom of her own. Instead the computer whizz is job hunting in between bending the law—just a bit—to unearth the bastards who’d enslaved her friends. The clueless cops and Feds obviously need help.

Shaken by the unexpected emotional exposure, Sally flees the demanding Masters and the Shadowlands.

Both Galen and Vance have reasons not to seek a long-term submissive, but when a brutal attack by her ex-Dom sends Sally into their home, the two agents are driven to protect her. To help her. To take her under command. Falling in love isn’t in the plans.

But as the little imp brings light into their lives, they begin to want more…until they discover she’s hacked into an organization that delights in burning people alive.

If only… if only this book had been earlier in the series, if only it weren’t so repetitive, if only I could give it 5 stars.

I really liked these characters, Sally, Galen and Vance made an amusing, cheeky trio. The ménage worked well, in fact, I’d argue perhaps a little too well.

The issues that plagued the trio were interesting, particularly the external pressures and work related challenges. What I didn’t like was the repetitiveness of the sex.

I thoroughly enjoyed the crime syndicate side story and the glimpses into other Masters and subs lives, including the dysfunctions. The message about communication being key was as subtle as a sledgehammer. Yet, it has to be made. This is why I feel this should have been closer to the beginning of the series. It exemplifies example after example of what poor communication can do to a relationship, D/s or otherwise.

Another easy, enjoyable read from Cherise. I will devour book #9 in the series soon.