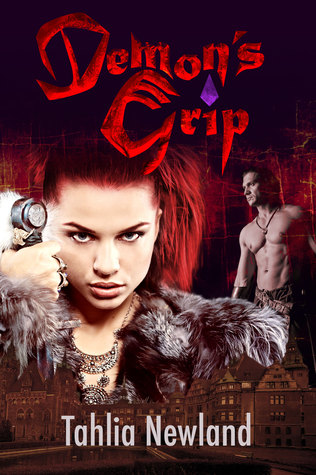 Synopsis: Demon slayer Ariel Malony thought she knew her friend and travelling companion, Nick, but she discovers that at the University of Sheldra, he is a respected translator with little time to spare. Now that he isn’t at her side all the time, she wishes he was, and when she finally admits her love, powerful emotions sweep her away like flotsam in a raging torrent.

An army of demons force them to cut short their stay and from the Gothic architecture of Sheldra, they travel between enormous standing stones, and across a vast dry plain to the ancient granite walls of the Hermitage where Ariel meets her greatest challenge yet.

There, the demon lord Emot takes advantage of her inexperience in matters of the heart and preys on her desire for pleasure, setting off a struggle with addiction that threatens to break Nick’s heart and turn Ariel into the demon’s mindless slave. She must reach deep into her soul and find the mystical power she needs to kill the one who promises pleasure but delivers only pain. Fail, and she will lose the one she loves and spend an eternity in the demon’s grip.

Bookish Things: 453 pages. The cover is in line with the others from the series.

Bookshelves: aussie-author-challenge-2015, aussie-authors, aww2015, indie-author, indie-review-copies, august-challenge, 3-star-review, fantasy, romance-ish, smirk-worthy, ya
Demons grip is book #3 in Tahlia Newland’s Diamond Peak series.
It took me 12 days to finish this book. Some of that delay was craziness in my life, but most of the reason it took so long was because this book is a slow burn, peppered with small constant struggles, but no real ‘climax’.

Other reviewers have said this book is one of huge personal growth for the protagonist, Ariel, and that is 100% true. The down side to this book being so much about her maturity is that it’s not as exciting and adventurous as the previous two books.

The struggles Ariel faces mirror similar issues any young teen would face. The question of lust and losing oneself in daydreams and cravings are just the tip of the iceberg.

In this way, I feel this book delivers something that the first two books don’t, and that is a realistic, albeit fantastically tinged, look at what goes on in a teens mind.

Once again, I felt the balance between the story and all the ‘inner light’ stuff was a little too focused on the inner light, which further removed me from an already slower read.

This issue aside, the story offers interesting insights into demons and the complexity of the world Tahlia has built here.

I particularly enjoyed Emot Sai in this one. His character evoked a strong emotional response from me. I hated him in one chapter and felt empathy for him in another. This takes considerable writing skill. Well done!

His particularly menacing physical appearance, coupled with manipulation and greed all wrapped up in one wicked package. A great antagonist if ever I read one.

Overall, I liked the story and I will finish the series, but it might take me a while.

I am happy to report that little Spud makes a cameo appearance and I was very excited to see him resurface, even if it was only for a short while 🙂

One thing I noticed: