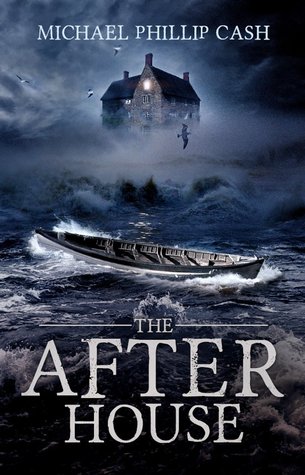 Synopsis: Remy Galway and her daughter Olivia are rebuilding their life after a failed marriage in a 300 year old cottage in historic Cold Spring Harbor, Long Island. Little do they know, another occupant is lurking in the haven of their own home. Will the After House be their shelter or their tomb?

Bookish Things: 154 pages. The cover is devine. I love it. It’s a shame the story wasn’t up to that cover art.

The After House probably should have been called The After Thought.

It opened strongly enough; The Moby Dick inspired whale hunting with Captain Eli, set in 1840, was quite imaginative and engaging. The reader was dragged upon a rather thrilling sperm whale chase and being introduced to a range of characters that were varied and interesting.

When the timeline changed to present day, is where things got a bit messy.

I’ll start by saying I actually liked Remy and Olivia; I even liked the relationship Remy had with her parents. Where things fell down for me was when Hugh came onto the scene. I get the notion of love at first sight and soul mates, but the whole thing seemed contrived, something used to fuel the plot.

Add to this, the fact that this book has been tagged as horror and thriller, when in reality it’s more on par with Casper the Friendly ghost. It’s far from scary and the way it goes into the whole haunting thing reeks with a condescending stench. Almost as if the reader couldn’t handle a scarier story. The most thrilling scene of the book involved nothing paranormal. This was quite a letdown.

The book also seems to not know what genre it wants to be. It plays within several major ones: romance, paranormal, drama, thriller, and crime/whodunit/mystery. Yet doesn’t truly reside in any, it doesn’t fit in one place, which, to me at least, lets it down. If you have lovers of paranormal romance they’ll likely feel cheesed off because that theme is only lightly touched upon. If you have hard-core horror and thriller fans, they’ll likely feel cheated because it’s too soft.

Where the book will sell, is that weird ‘general topics’ market where you’re unsure what you feel like reading. It appeals to many different genres and will, by process of having so many in there, surely appeal to you with one of them.

So, where I was going with my first line… this book could have been an epic retelling of a historical story. It could have been a vivid, freaky and somewhat disturbing horror/thriller, or it could have been a sweet loving romance. But by adding each of these layers the plot got more complex and the last few chapters were so rushed it felt like the ending was merely an afterthought. The information dumping was so prolific I needed to have a break from reading to process just what happened.

I don’t want to spoil the ending, but I felt that the characters involved in the last chapters were ripped off, missing out on having their story mean anything to the reader.

There also were a few typos and such I noticed:

**Note: I was provided an electronic copy of this book through Netgalley in exchange for an honest review.**

One thought on “Review: The After House by Michael Phillip Cash”