This post is about my review for and the release of Koven by Vanessa Skye.

I got the privilege of an ARC of this book, sadly, my backlog of review requests means I only just snuck in reading it before it was released. I feel I should have read this the second I got it.

Anyway, enough of my whinging and on with the post. 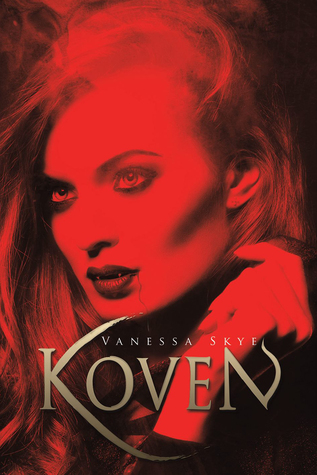 Synopsis: When Celeste was kidnapped a century ago and turned against her will by a cruel vampire fighter, she expected to spend her doomed eternity as his slave, chained in the darkness, and she questioned her ability to survive. But things don’t always go as expected.

He never expected Celeste to learn how to fight.

He never expected Celeste to become the best warrior he had ever seen.

He never expected the secret hidden away in her blood,

And he certainly never expected to become a victim of his own sword.

Tormented by her past and the dreams she can’t explain, Celeste now roams the earth slaying the creatures she loathes—other vampires like herself—and seeking revenge against those who would harm innocents in the name of bloodlust.

Until she crosses paths with Striker, the handsome vampire leader weighed down by his own tortured story.

In his quest for answers about the stunning Celeste, Striker finds out more than he ever thought possible—about himself, his true origins, and his destiny. But the secret Celeste is keeping from him might be the one thing that keeps them apart for good—a secret even more dangerous than a new, powerful enemy they never saw coming.

As ancient mysteries, forgotten prophecies, and cruel eras collide, Celeste must confront her past as well as her future. Fighting her inner demons and letting Striker beyond the wall she built around her heart haunts her, even more than her captive past.

Enter a supernatural world of passion, lust, sexual obsession, and power that the unsuspecting humans never knew existed, until now . . .

Bookish Things: 294 pages. The cover is simple, yet effective and very appropriate for the story. It certainly screams paranormal to me.

Where to buy: Direct from the publisher The Writers CoffeeShop or from Amazon on kindle for $4.96 from today!

Koven, Vanessa Skye’s new Paranormal book, the start of a series or trilogy or something, is a rather interesting read.

With some of the vampire norms (drinking blood, fangs, heightened sexual desire etc.), and some new ones, the book takes the reader on a twisted little ride through Celeste’s past and present all filled with danger.

I liked Celeste, I liked Striker too, our male lead, but I felt their ‘relationship’ was a bit rushed (bordering on insta-love), and while there were complexities, I felt it was purely fuelled by sexual attraction and nothing else. (minus one star.)

The weaving threads of the story and how they tied Celeste and Striker together, was really enjoyable. I particularly liked the ceremonial initiation into the Koven; it was a great idea and one that sparked many interesting thoughts about the vampire society as a whole.

The belief system of the vampire society was also a fresh and exciting part of this book. I loved the idea of corruption and deceit amongst the vampires, the introduction of a hybrid (not unlike some of the other vampire inspired shows these days) race and all the complexities that come with these new facets of their society.

Some of the plot twists felt really obvious to me, almost signposted, and this is why I’ve subtracted another star, because I know Vanessa can do better. I’ve seen it in her Enemy Inside series.

BUT that does not mean that I didn’t enjoy this book. I did! A lot! It just wasn’t Vanessa’s best. However, I would still strongly recommend this book to vampire lovers, paranormal romance lovers and those who enjoy reading books with sassy heroines and hot male leads.

I noticed one typo:

90% – They (delete y) accounts and businesses have been…

**Note: I was provided an electronic copy of this book through Netgalley in exchange for an honest review**