I’m sure you’ve all experienced this at one point in time. Often for me it is accompanied quite annoyingly with physical lethargy too, which makes me feel somewhat akin to a fat pumpkin.

Yep, if I tried hard right now I’m sure I could get my face looking something like this. I do tend to put a goofy face on quite well! 🙂

But, really, it’s worse than that, it’s not just the crispy hard exterior, it’s the soft, stringy, mushy centre. The feeling that if someone squeezed me I might just ooze out and be too mentally lethargic to actually resist.

I have been thinking – albeit slowly – about this feeling and I believe it comes often after a time of great stress. The stress could be mental or physical, or in fact probably both.

In this case, it’s definitely related to the death of my grandfather and the resulting emotions and grieving. I feel at the moment that I’m past that initial painfully incapacitating grief, where you burst into tears for no particular reason. I still think of him every day, I sometimes cry, sometimes it makes me sad, other times I’m happy remembering the way he used to be in a constant state of motion, always working or laughing or dancing. The way he used to dote on me and my younger female cousin (we both had a very special spot in his heart and he in ours) or remember the ferrets he used to keep for rabbiting (Frisky Fred and Lazy Harry) and how I was the only one out of the five cousins who could pick up and cuddle Frisky Fred, he bit all the others.

I initially thought that this mental lethargy was another step in the grief process, but I know I’ve experienced it before. The last time I felt like this was when I was physically exhausting myself for 10 weeks, trying my absolute best to shed up to 10kg in 10 weeks. The end result was getting myself sick for 3 weeks of the challenge, followed rather swiftly by the mental lethargy. I stopped engaging in things, I felt passive.

I feel that same inertness and lack of passion again now.

It does seem to be a strange feeling though, I have passion for some things. I still enjoy my cooking (I suppose the yummy food is good incentive), I still enjoy reading (but my genre of choice has changed a bit of late). I just seem to be experiencing a feeling of lethargy that I can only sometimes overcome.

This has sapped my creativity too. While I was going great guns on my novel in November until Grandad got sick, I’ve not returned to it since. I have noticed only in the last week or so that my creativity is starting to pick back up, I’ve had a few ideas for the story, but I haven’t gotten motivated enough to pick up the quill again.

Perhaps next week I will be back on my game.

And just because I can, here’s another pumpkin. A WordPress pumpkin carving. How awesome! 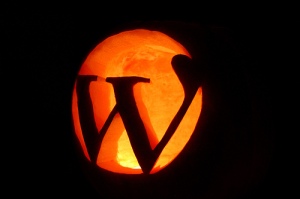 Have you experienced this feeling of passiveness? What do you do to combat it?